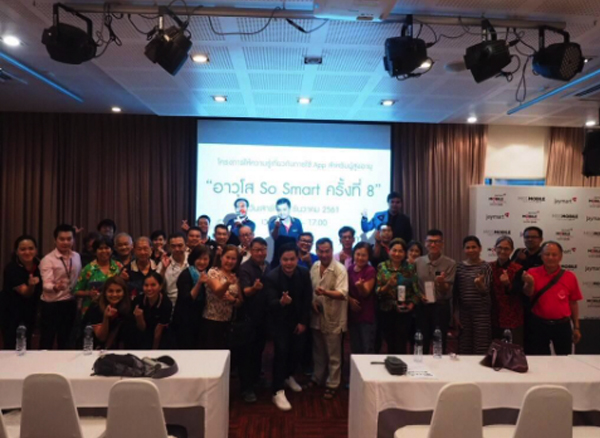 Thailand has entered an aging society since 2005 as the country has more than 10.5% of population who were 60 years and above. In addition, the tendency indicates that elderly population is increasing continuously as the birth rate is declining and average life expectancy of Thai population is increasing. This is resulting from the country’s development in medical, public health, economic, social and environmental aspects etc.

Therefore, it is expected that the elderly population will continue to rise steadily. Both public and private organizations recognize the importance of the issue and have initiated various projects to provide particular care for the elders such as senior citizen card, pension fund and establishment of clinics and elderly clubs in various hospitals, etc. Moreover, JMT also realizes the importance of mental and social aspects of elderly. Therefore, we initiated a project to provide education on usage of mobile application under the Project “Awuso So Smart” to help the elders to live happily in the society.

On August 11, 2015, Jay Mart has organized the first project at Jay Mart store at Siam Paragon. The atmosphere was filled with fun and attracted a lot of elders’ attention about the use of smart phones and various mobile phone applications. Moreover, the organizing staffs also provide advice and answer questions from elders who participated in the event. Therefore, elders have better understanding of the use of smart phones and able to use the Applications to communicate with their children, grandchildren, family and friends in the same age group.

The 2nd “Awuso So Smart” project was held on September 11, 2015, at FU5 Coffee shop, The Jas Wanghin. The atmosphere in the event was filled with fun as ever. Many seniors attended the event to learn about applications. There were staffs to look after and answer questions of the seniors in a friendly manner.

In the year of 2016, the company held the 6th “Awuso So Smart” project on 11 June 2016 at the Company Head Office which gains a lot of attention from elders for 75 people.

In 2017, these activities still continued on 7 October 2017 by corroboration with Suanluang Rotary Association.

In the year of 2018, the company held the 8th “Awuso So Smart” project on 15 December 2018 at the Company Head Office which gains a lot of attention from elders for 50 people.

Results from the Project;

Elders are able to have closer relationship with the family and friends in the same age group.